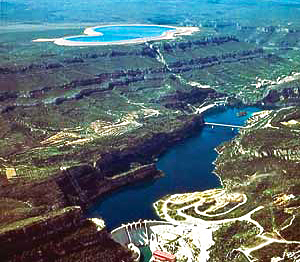 In the past decade, wind energy production has soared in Spain, rising from 6 percent of the country’s electricity generation in 2004 to about 20 percent today. While that is certainly good news for boosters of clean energy, the surge in renewables has come with the challenge of ensuring that electric power is available when customers want it, not just when the wind blows.

To help accommodate the increased supply of wind, Spain’s utilities have turned not to high-tech, 21st-century batteries, but rather to a time-tested 19th-century technology — pumped storage hydroelectricity. Pumped storage facilities are typically equipped with pumps and generators that move water between upper and lower reservoirs. A basic setup uses excess electricity — generated, say, from wind turbines during a blustery night — to pump water from a lower reservoir, such as behind a dam, to a reservoir at a higher elevation. Then, when the wind ceases to blow or electricity demand spikes, the water from on high is released to spin hydroelectric turbines.